Following the release of their debut album Cura, Juno Award-winning act Keys N Krates are back to share the official music video for album cut “Glitter,” featuring vocals from frequent Kehlani collaborator Ambré. The psychedelic visual follows Ambré on a night time journey throughout the streets of Los Angeles, illuminating the darkness as she dances to the silky disco beat. “Glitter” is one of the standout tracks from the new record, and has been supported on the radio by Diplo, Anna Lunoe, TOKiMONSTA, Julie Adenuga, Jason Bentley and Annie Nightingale. Recently, Keys N Krates were featured on Diplo and Friends on BBC. Their mix can be heard here.

Cura is out now via Dim Mak Records and is some of the strongest work yet from Keys N Krates. On their debut album, Keys N Krates effortlessly elevate modern electronic music by building upon their bass-centric, sample-driven sound to curate a nostalgia-inducing mixture of classic hip hop, R&B, disco, and soulful electronic textures. Featuring collaborations with some of contemporary music’s most exciting figures, including Tory Lanez (“Music To My Ears”), 070 Shake(“My Night”), and Ambré (“Glitter”), Cura is curious blend of undeniable grooves.

The album is supported by an extensive headlining world tour, with North American dates that kicked off on January 24th in Buffalo, NY and will run through the spring. The group will make festival appearances at Ultra Music Festival and the recently announced Sónar Hong Kong. Shortly following, they embark on European dates, and circle back for a homecoming show at Toronto’s Danforth Music Hall on May 11th.

Watch “Glitter” ft. Ambré and hear Cura above, and see below for full album details, tour routing, and to read more about Keys N Krates. 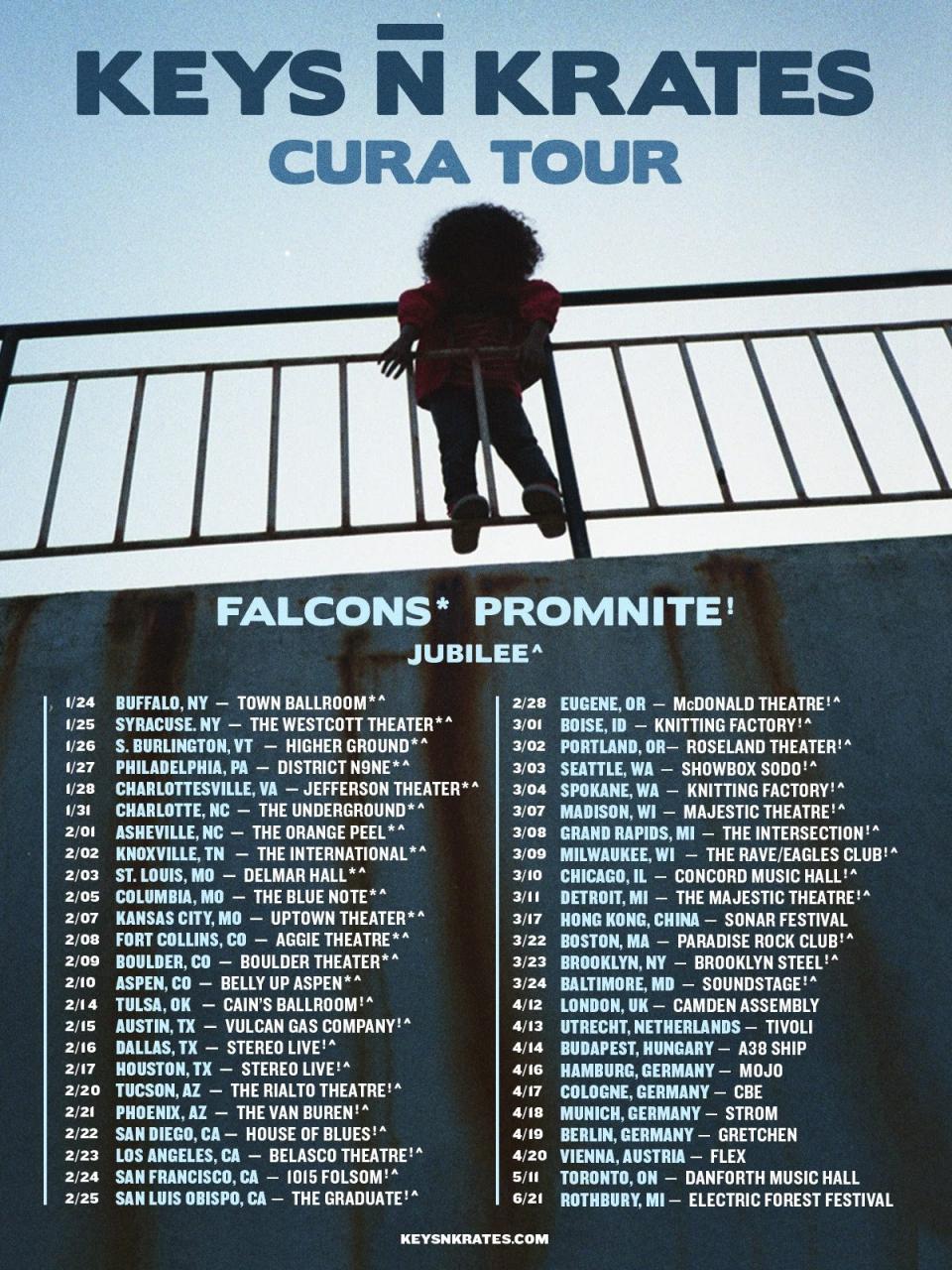 About Keys N Krates:
Since forming a decade ago in their native Toronto, Keys N Krates have carved their own path via a bass-centric, sample-driven sound which melds the realms of electronic, hip-hop and beyond. The group-composed of drummer Adam Tune, keyboardist David Matisse and turntablist Jr. Flo.-has built a venerable reputation as one of the leading live electronic acts today on the strength of their onstage instrumentation and energetic sets. Keys N Krates now elevate their craft with Cura, their debut artist album.

Reflecting a sonic evolution many years in the making, Cura sees Keys N Krates evolving from revered instrumental beat-makers into musically sophisticated producers and songwriters. Cura embodies Keys N Krates’ matured style of now: soulful electronic music created with an organic touch, allowing for open experimentation and sonic curiosity. On “Music to My Ears,” dynamic strings and reverberant bass provide a joyous backbone to Grammy-nominated vocalist Tory Lanez’ uplifting hook. On “Glitter,” a slow-burning romp through disco-tinged future R&B, the group slathers the groove-laden cut with satiny synths and distorted strings alongside the vocals of rising sensation Ambré. “Do What U Do” revisits the sample based, boom-bap beats and harmonious vocal layers that have become a keystone of the Keys N Krates aesthetic. Elsewhere, the hard-hitting instrumental “Flute Loop,” featuring Ouici, is a frenetic bomb exploding with trap-leaning muscle, while “My Night” boasts hallucinogenic production accentuated by 070 Shake’s haunting sung / rap vocal.

Keys N Krates first broke into the mainstream with the SOLOW EP (Dim Mak, 2013), featuring the breakthrough single “Dum Dee Dum,” which recently received gold certification in the US in 2017. Since its release, the track’s cheeky official music video was nominated for a Prism Prize by the Association for Music and Innovative Arts in Canada as well as a Berlin Music Video Award in Germany in 2014. In 2013, the group later released a remix of the track featuring a collection of buzzing Chicago-based rappers, including G.O.O.D. Music’s Cyhi the Prynce as well as King Louie and Tree. Elsewhere, the group released “Keep It 100” (Mad Decent, 2014), a collaboration with producer/DJ Grandtheft, which was featured in a trailer for the animated film Minions in 2015 and won for Best EDM/Dance Video in the 2015 Much Music Video Awards in Canada. In 2016, Keys N Krates took home their first win at the Juno Awards in Canada in the Dance Recording of the Year category for their song “Save Me,” off the Midnite Mass EP (Dim Mak, 2016), featuring British singer/songwriter Katy B. The group’s discography also includes the Every Nite EP (Dim Mak, 2014) as well as numerous remixes.

Originally formed as a live hip-hop act in 2008, Keys N Krates have since logged countless hours on the road via a relentless tour schedule and have been recognized for advancing the live performance aspect within electronic music. They have headlined their own tours and performed high-profile sets at the top international music festivals including Coachella, Sónar, Bonnaroo, Lollapalooza, Tomorrowland, EDC Las Vegas, Pukkelpop, Bestival and more. Keys N Krates will spend 2018 on an extensive world tour in support of Cura, performing headlining shows across the US, Canada, and Europe, with additional shows in Asia and Australia. In-between tour stops, they are set to grace festival stages at Sónar Hong Kong, Ultra Music Festival, and Electric Forest.

While Cura marks the crew’s debut full-length album, it, too, initiates a first step toward a new creative vision, a breakthrough in sound and a new beginning for Keys N Krates.